By Matt Gates on 08/10/14 | Category - Graphic Design
Phuse are excited to have worked with Paul McDonagh designing a cover for his first novel Groundwork.

Groundwork is a powerful novel set during the economic and political upheaval of the 1990's. It is a wonderfully evocative story that will live long in the memory.

The book will be published in both print and as an ebook and is available to buy from Amazon. A proof copy of the book can be seen below, can't wait to see the finished version!

We also produced the website which you can view here: www.pgmcdonagh.com 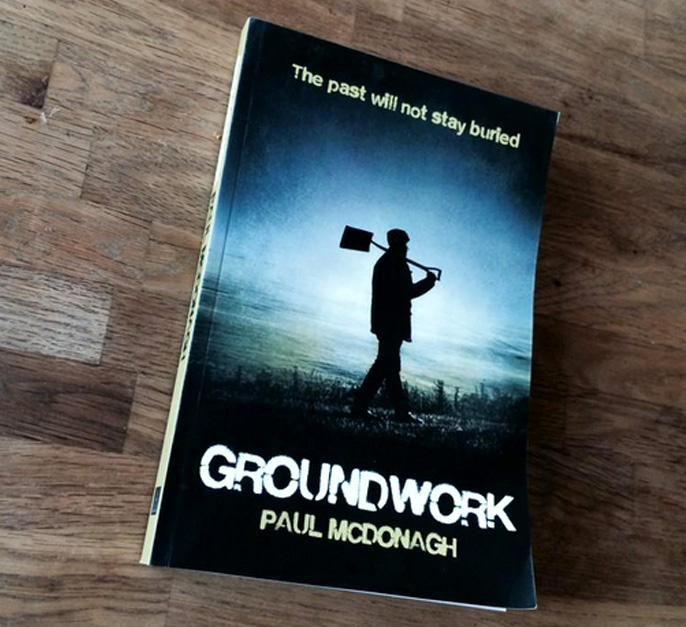 By Matt Gates on 21/06/13 | Category - Graphic Design
We have just designed these three striking book cover designs for Lord Bath of Longleat. The three books cover Lord Bath's early life from childhood to Oxford. Each book has a different detail of the paintings of Lord Bath montage with a photo of him from that era.

The eBooks will shortly be available to buy on Amazon and will also be advertised on Lord Bath's new website which we are currently developing. 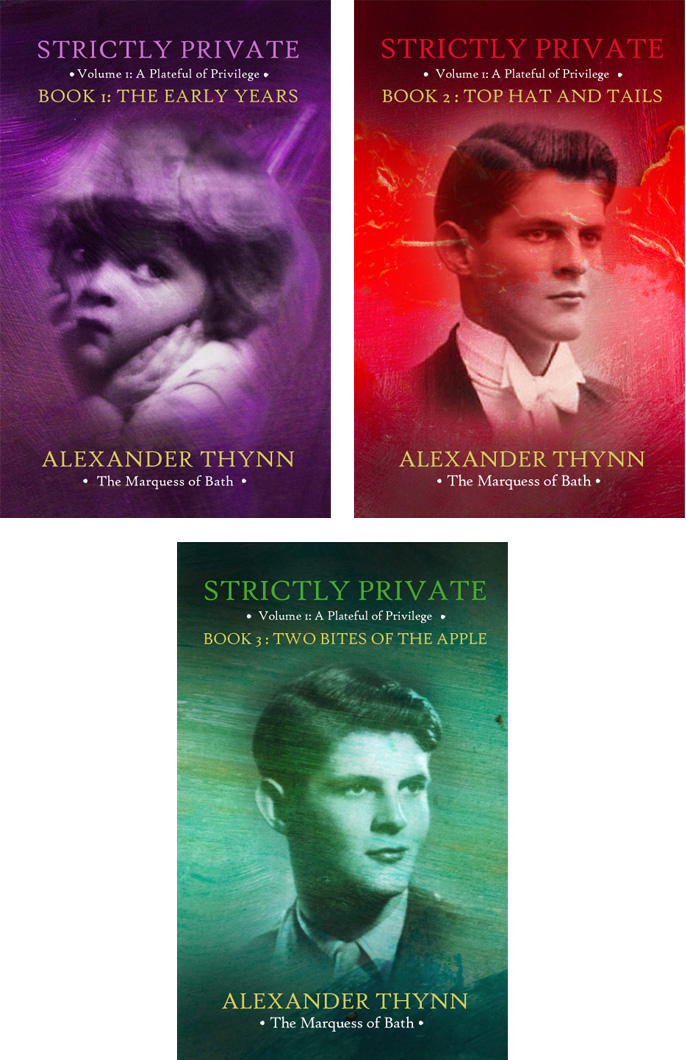 By Matt Gates on 04/10/12 | Category - Graphic Design
Being a reader of science fiction and a lover of graphic design I have always admired the cover art of science fiction novels especially the ones printed in the 50's, 60's and 70's. Whenever in charity shops and boot sale type places I always keep my eye open for these generally torn a tatted items.

I recently found a number of old novels some in great condition which had probabaly never been read. Whether your a science fiction fan or not you can't help but admire the skill of some of these pre-computer age graphic artists.

Researching the covers led me to discover the work of two exciting graphic designers; David Pelham and Franco Grignani. 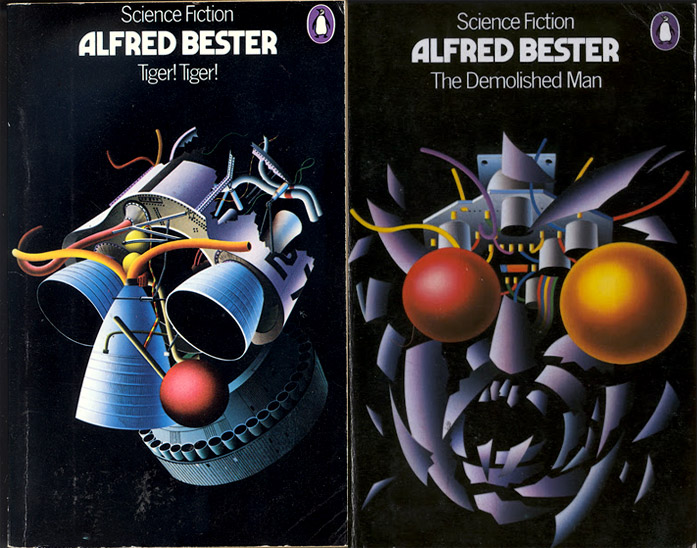 David Pelham became Art Director for Peguin Fiction in 1968 creating a number of covers himself including the two covers above, both Alfred Bester novels. He also created the famous cover artwork for the Antony Burgess novel A Clockwork Orange. Pelham also commisioned other artists like Italian Franco Grignani.

Grignani went on to create a series of sixteen covers for Penguin including the cover shown below right for Fred Saberhagen's 1970 novel Berserker. The cover depicts a distorted robotic figure towering over hordes of humans, it takes on a more sinister twist when you note that the novel is about cold alien killing machines programmed to destroy all life in the universe! 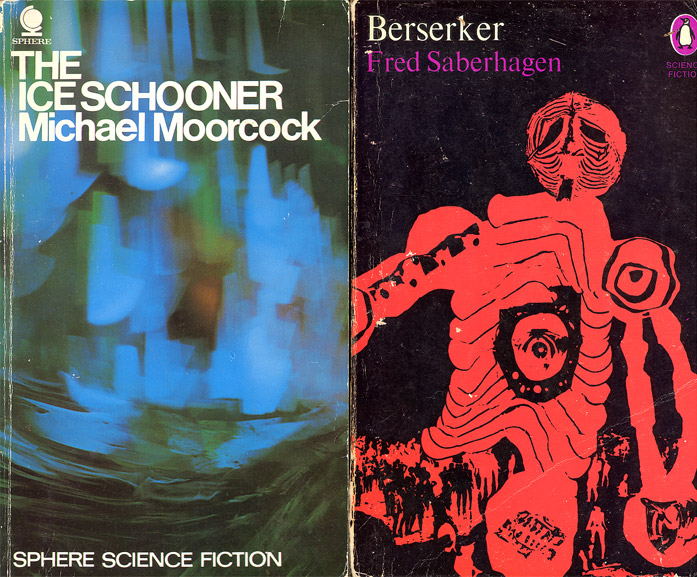 In a time before any computer aided design the two slightly psychedelic covers below are interesting. The face in the middle is Issac Asimov himself. 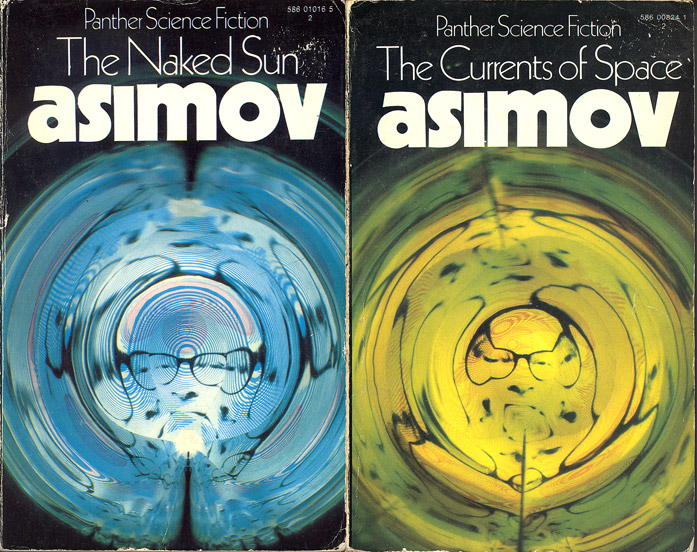 By Matt on 21/04/12 | Category - Graphic Design
Listen To This is a series of four connected talks that bring together musicians, writers and critics. Developed and presented by author Daryl Easlea and academic Andrew Branch and hosted by Metal Culture.

To publicise the event Phuse were asked to develop an identity and brand concept to be used across a number of different mediums. The final design can be seen below plus a number of alternatives that were also presented.

This design concept was inspired by the album cover artwork of 'The Best of Blur' created by artist Julian Opie. Blur are one of the bands being covered in the series of talks so the connection here was relevant to the project. Instead of the four members of Blur we have four artists also discussed in the talks; Wilko Johnson, David Bowie, Pete Townshend and Jackie Wilson. The flyer is design to resemble an old vinyl single with the record half removed from the cover, the Listen To This logo is shown in the middle of the record. This was the design chosen by the client and has been produced initially as a die cut A5 flyer. 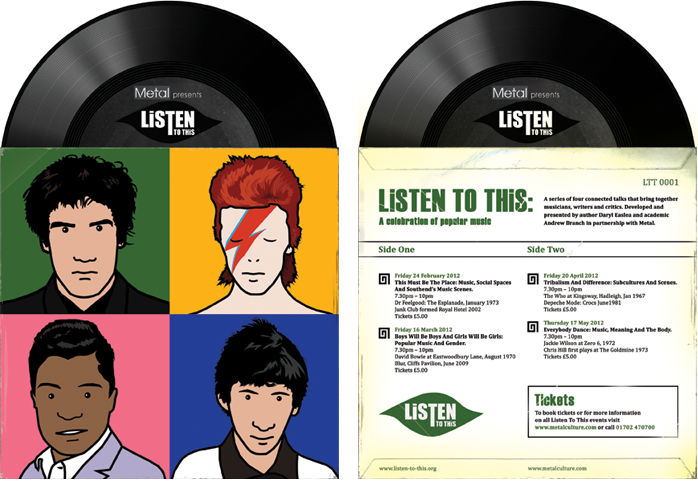 A number of different logos were also created as part of the design process, the chosen logo can be seen below right. This logo was conceived to resemble a 1960's record label logo.

This design was inspired the small band badges that have been popular for decades. The front cover below left has a different badge for each artist or band discussed in the talks. The Listen To This logo is also in the style of a badge. 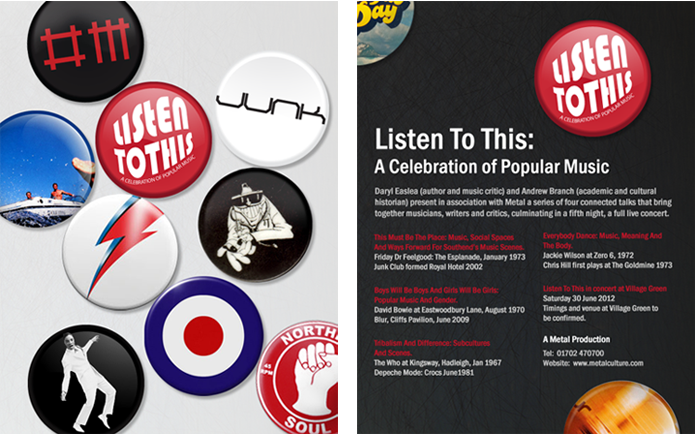 This design plays with the typography of a number of famous album and single covers to produce an effective flyer. The typefaces have been carried through to the back cover create a logo. 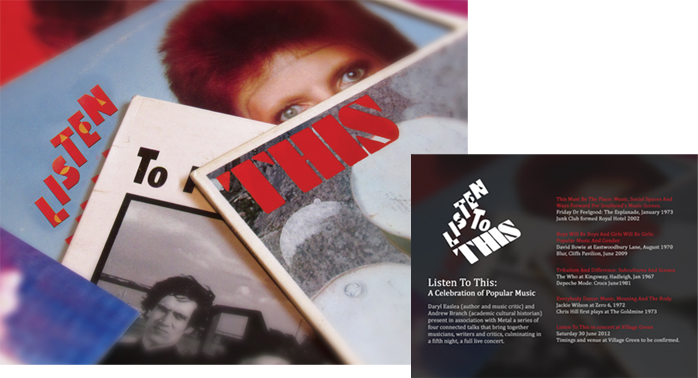 Reminiscent of scrapbook collages created in our teenage years this design brings together images of all the artists featured in the talks. 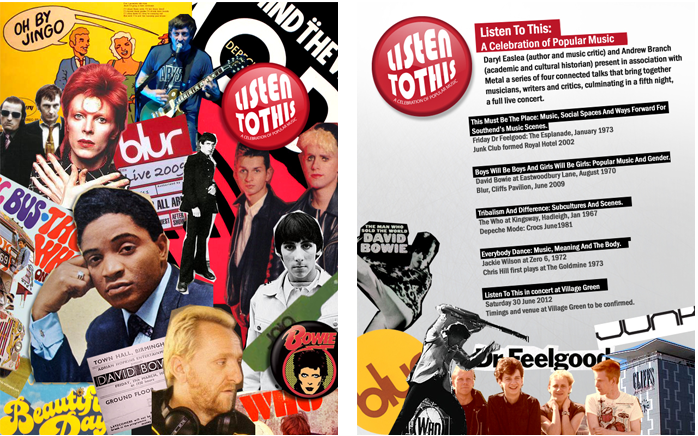 You can view our web design and flash web development portfolios for more examples of our work.